Hi guys, I will provide some personal experience on how to power up as a water ranger. Feel free to add in the comment if you have other good ideas. This post is written to help an entry to the intermediate level of rangers. I am currently the #1 in ranger rift.

Water ranger attack is mainly using three skills and auto attack, once you have a water rune set setup and equip Meteor skill, you will be able to trigger a Meteor every 12 auto attacks. Everything else is built around this mechanism.

Meteor: The skill that you deal most damage on, there is a three second of cast time and cannot change direction after you point it. So you will need to use these three seconds to find the best angle to attack while dodging the enemy attacks.

Sleet Storm: This skill is so op in early game, high aoe damage that wipe the whole floor. But the damage does not feel that high in late game. It is used as a Crowd Control skill because it has a chance to freeze enemies after your weapon reaches 5 stars.

Speed Rush: This skill boosts up your attack speed. Since attack speed is one of the most important stats for water rangers, and there is no other skill that really does much damage in late game other than auto and Meteor, I choose speed rush.

Rapid Shot: This skill costs 0 mp, it is used to fill up the gap between other skills. I will explain this in the gear section.

Here is my setup: 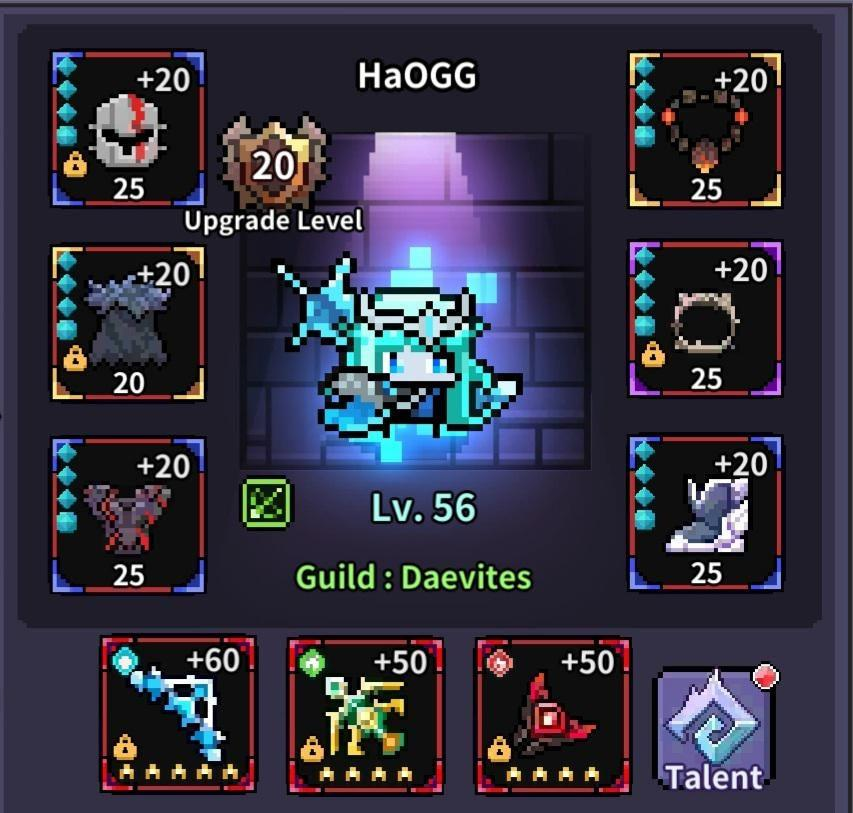 Head: Gladiator Mask. This gear will keep hurting you when you use any skill, but the amount of hp drop is not that much. It is used to pair with the Armor gear to keep 5 stacks of attack speed boost.

Armor: Breastplate of Battle. Every time you get hurt, boost attack and movement speed, stack up to 5.

Charm: Power of Runestone. Every time you get a crit, you will boost your attack speed for 2 seconds.

Ring: Broken Ring. This ring boosts your attack damage for 3 seconds when you cast a skill. So you will need to do your best to keep that buff on all time. I am using Rapid Shot to fill the gaps and keep this buff.Changed to Greediness, please see the water ranger mix talk guide for more detail.

Stats choose: I like to start with choosing two orange stats gears, then reforge for the third one. I like water attack=attack mod>ap>crit rate>res=def>everything else.

Get at least one main blue slot + 3 blue small slot when you are under 400 water energy, but after gear lv 25 (you will get after rift 95), it is better to have all blue slots to get 800 rune power, or it is almost no way to beat rift 96-100. The difference between under 400 to 400 to 800 is like a kindergartener to middle school student to adult who is living as a killer.

Do the best you could, but don't spend any time or money on this. Just have 1 witch card equipped and make as many sets you can. It's not worth it. It is just pure RNG and there are 4 secondary stats. The rng of just one stat to 4 stars is really bad.

If you decide to use real money to upgrade yourself, I think you should get all the weapon upgrade packages, it will give you one replacement material when you level up your weapon to 5 stars. The rune perk is really good and worth it. You can also use money on add rune slots for gears, reroll slot color, and reforge. DON'T spend any money on cards, not worth it.

How to fight and beat a hard rift

The rifts after 85 are hard and require some rng and luck. The best way to fight a rift is to have an altar near the boss room and have as many treasure rooms and crystal rooms in middle so you can skip them. Keep trying and you will get it!