Hi guys, in this guide I will discuss Water Rangers after Rift 110 and I will mainly cover setup changes, cards, ways to improve. Stats, etc. Rift 120 will be discussed in a different guide. We will talk about everything you need to beat rift 120.

First, we want to talk about what has been the problem for water rangers after rift 110. There are a lot of wood bosses. It is not easy to fight all of them.

This boss will summon a lot of totems on the map to test your survivability. You need to Meteor these totems with the boss. When there are multiple totems on the map, your auto cast Meteor will choose the lowest position enemy (check guide 2 if you don't know this). You want to make sure to stand at the bottom of the map to adjust your position to attack both boss and totem. If you have a purple altar near the boss room, just sit on the boss when the projectiles are about to fire, make sure all of the projectiles hit the boss.

This is one of the most annoying bosses in these rifts. It will summon a lot of little mushrooms during the fight and disappear for a few seconds, these mushrooms will put you to sleep on hit, make sure you have Haste ready before it summons these mushrooms. Even if you have Haste, you might still get hit by these little mushrooms, lucky you still have a few seconds before you sleep. If you get hit, it might be a good idea to stand around the middle of the map and the boss will shoot projectiles and wake you up. Another way of get away with sleep is have a 2* Artoo card equipped, it will clean all debuffs every 6 seconds.

Not much different than before, if you find it challenging, find a purple altar and sit on her.

Not much different than before, if you find it challenging, find a purple altar and sit on it.

The last challenge before rift 120, it's not friendly for water rangers. You might find yourself dead after taking 3 shots. That's totally normal. You need to find the gap between each arrow. Depending on what altar you have, you might want to use different ways to fight it. If you have purple, you might want to catch the moment after it shoots the orb and sit on it and the moment it goes back to the middle. If you have blue or green altars, then you want to move left and right back and forth. When it starts to run the loop, wait at the bottom left of the map, and find a good angle of Meteor to make sure it gets hit once it gets to the bottom right corner. You need a good rng to beat this rift.

It's a water boss, not as challenging as these wood bosses, not much different than before. Dodge the spinning circle and you will be good. Find a purple altar if you have trouble with it.

No difference, 3 rounds of spreading shots with an opening at the bottom, make sure you move away from bottom, an electric cutting line will move to the bottom, avoid it. The boss will also summon electric towers at a random place, use Meteor to kill both.

A really funny looking boss (I like the look of it, i'm using his avatar now) throwing ice at you, just beware the ice will come back. Not hard, if you find it hard, find a purple altar.

This octopus will summon a water bubble to chase you, and start to use the big red area attack after half hp. If you get caught by the bubble, use haste and run away. This fight is not hard.

Most of the cases, you will find the rng of rooms really hard. The monsters in normal rooms are tougher than before, you want to avoid the regice looking mobs, they are so hard to knock out. You will find a good rng about every 30 minutes (that is my average, might be better for you). If you beat all of these rifts, then congratulations, you are ready to get one shot by Leraje.

After a few oneshots by Leraje, you are probably asking yourself why are these rooms so hard to beat, why the boss always one shot you, why your damage is so low. Well, that is because we never think about how to match soul cards and stats.

If you are still using my setup in guide 1 (changed in 3.5), you probably find yourself at a very fast attack speed but every Meteor you hit, it is not that hard. Your attack pace will cap at 4, there are some attack speeds that get wasted after buff. It is time to change your setup!

Your attack speed from gears are mostly from armor, charm, and footwear. You need at least one piece of them to boost a little attack speed. Charm is the only part that doesn't really have other options to replace and trade for damage (There is one, but we will talk about that later). Armor has a replacement, Wetsuit, this gear will gain a stack when you cast a skill, each stack will give you 4% dmg (you don't have source for lv 30 gear yet, so lv 25-29 will all give 4% per stack) and max at 5 stacks. Your auto cast Meteor counts as cast skill, so there will be no problem to keep it up. This armor will give you about a 20% damage increase. For footwear, I changed to Secret pace. This gear will give you another 13% damage increase. Now, the basic damage is enough. Also make sure you have at least 4 star sleet storm and meteor. So, we give up attack speed on gears, and we have to find it in some other place. A really good place to have attack speed is the card system.

We have never talked about cards before, I used to say it was a waste of money. Well, that was true when you were a newbie. Now you are at rift 120 and you are not that newbie anymore. There are two ways to get attack speeds in cards, weapon cards and humanoid sets. Each weapon card could have 40 atk spd as primary at lv 15, they will give you 120 atk spd or 1.2 attack pace. The humanoid set will give you 25 attack pace and there is a golden humanoid card in card shop that could also have attack speed as primary stat, which is the Mer-Knight. If you have all 3 weapon cards primarily on atk spd, and humanoid set activated, you will have around 3.6 unbuffed, and will also cap at 4 after using speed rush skill. I gave another try on this setup, and I realized it still did not hit as hard as other classes. I compared to #1 mage in dps dummy, and I made this meme. 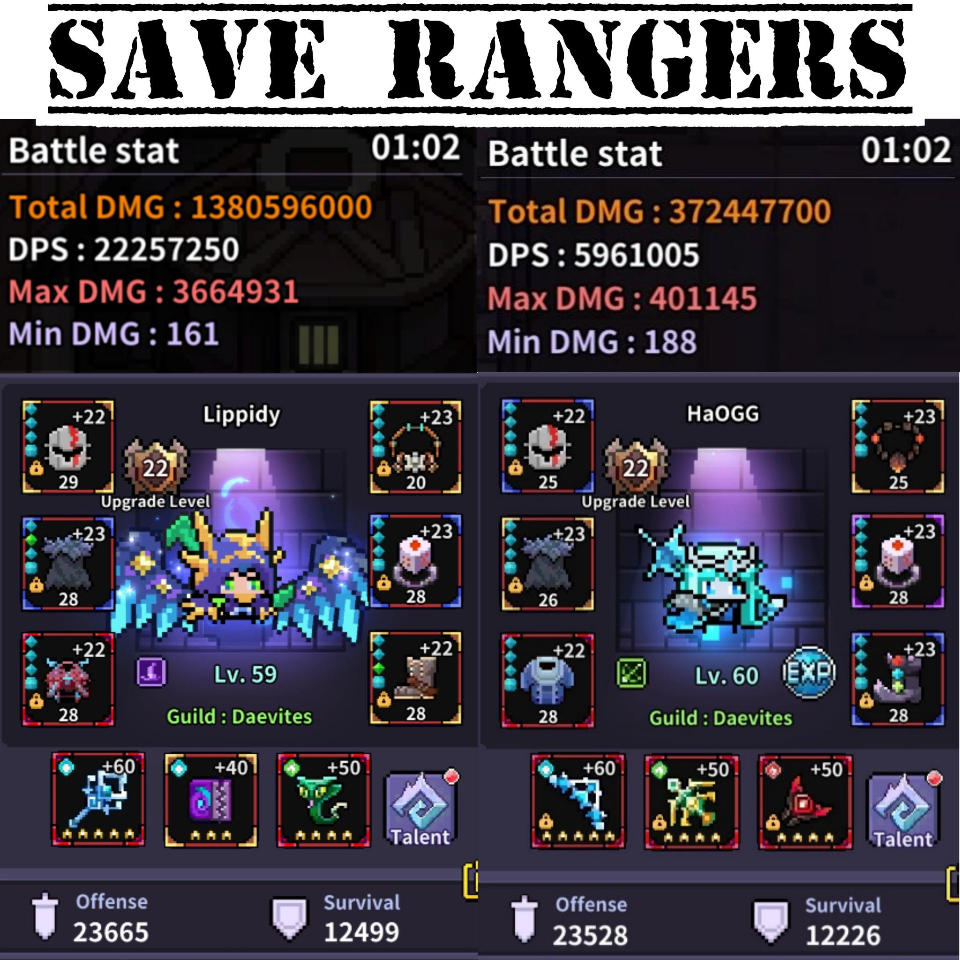 I was sad, very sad. It was like all the money I spent, all the time I spent, all the research and experiments I did with water rangers are just a waste of time. I compared his stats and found out that my AP, B. dmg are much higher than him, but his crit chance and crit dmg are much higher than me. I didn't think it might affect me that much, until I took a look at a really similar class, ninja. Lucky, the number 1 ninja is also in my guild. It was at a night raid, normally he will do 4 times of my damage (because he is out geared me a lot), but that night, he only did 100m higher than me. I asked what has changed from him, and he said he changed talent and dropped 40 crit dmg. I was shocked at the moment, all the time I tried to find a way to get a higher dps, and the answer was in front of me and I never noticed. I changed my mind on crits, and decided to give it a try. Well, I have played the game for about 1 month, but I don't have a lot of resources to support me on talents. So I have to change cards, yep again. I can't have all the stats you want, I have to make some compromise between crit rates, crit dmg, and atk spd. Without changing gears, the balance between these 3 stats has to become cards, runes, and talents. Since the set bonus of humanoid just gives 25 atk spd, that is the first thing I give up, I changed to demon and hunter set. They will give 40 crit rate and 12 crit dmg. There is another Dr. Tin card that has crit rate as primary and is part of the human set. That is a lot, now crit rate is good enough, and I have to find something to boost crit dmg. Abyssmaster is a good card to use since it's part of the hunter combo and it has crit dmg as primary, the 2 star card skill will +10 crit rate and -25 crit dmg. I also changed some runes to crit dmg. I remin two other weapon cards with attack speed, since water ranger damage is a lot depending on attack speed. Now the attack speed is about 2.9, that is too low. I have to add some attack speed without changing cards or gears. Where else I could get some attack speed?  Last place is the talent, the useless lv 60 talent. Disregard the second half of the talent, it will give 30 atk spd (it only gives 30, the lv 50 talent even give you 35, lol), now I get 3.2 attack pace unbuffed. Now the setup is completed. I did the dps dummy again, here is how much I did.

Almost doubled it! Then I beat Leraje on time with this build, even before the number 1 mage. Then I learned that not all classes are good at dps dummy, but they are also.good. Note: not all my cards fully upgraded, this dmg could be higher. The charm might be changed to is Sateless. Since this set is using a Greediness ring, it will give buff Sageless use. I need to do more testing on this later after I get lv 30 gears. 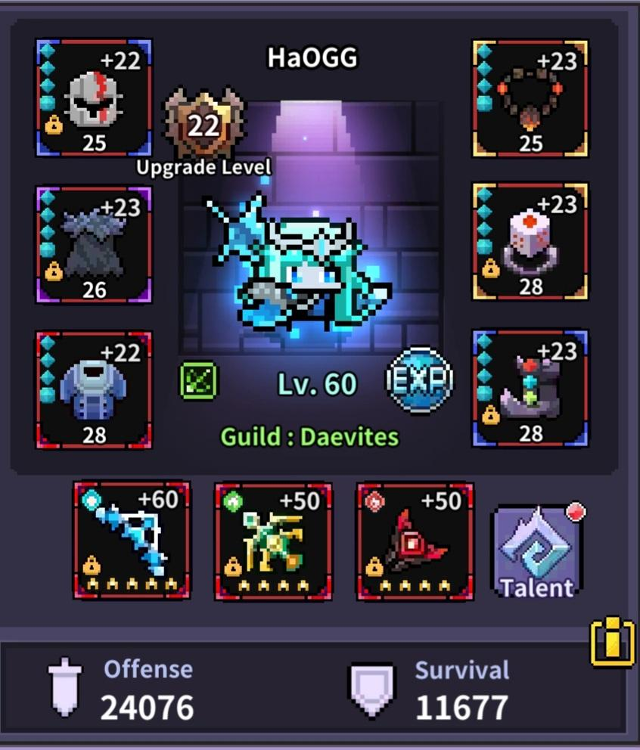 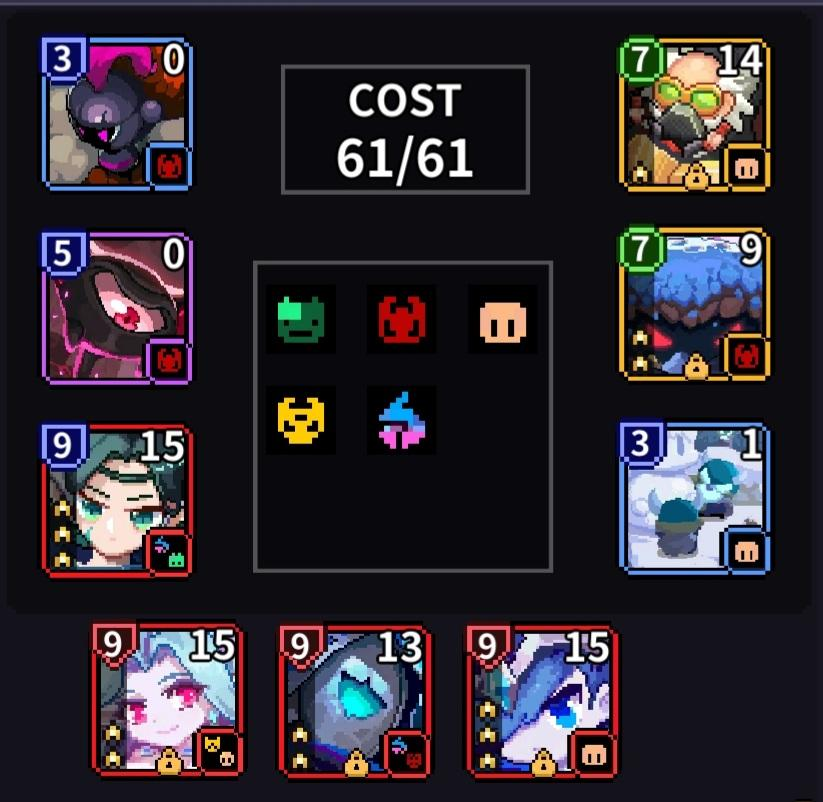 Lv 40: AP, the first talent give you some move speed, it is also good, recommend getting it after all atk related talents are upgraded.

Lv 55: + atk to half health enemy. Water Ranger doesn't do much damage with basic attacks, so second and third is not recommended for the first round.

Lv 60: Useless first and second talents, have to use second one since really need atk spd. But the third talent is really good, it gives you 11% B. DMG at lv 5, make sure you get it if you don't need atk spd any more.

I didn't have the luck to get a crit dmg helmet rune.

My pets are not super high leveled. But make sure you upgrade the combos, specifically atk spd, and skill dmg ones. They will build up more dmgs.